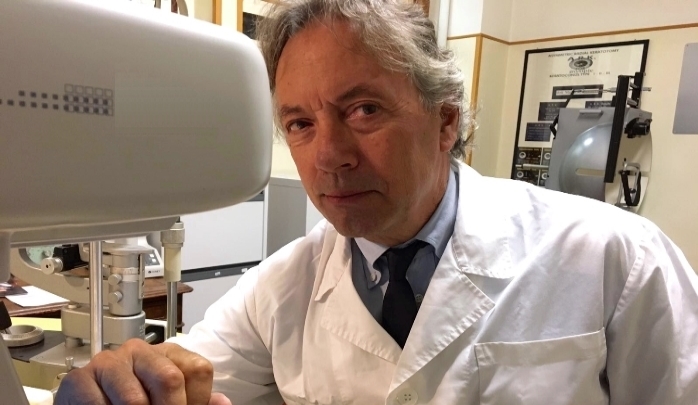 Dr. Marco Abbondanza is an Italian MD, ophthalmologist and eye surgeon holding two specialties in both Ophthalmology and Clinical Pathology.
During his medical career, he has become one of the leading experts on keratoconus and keratoconus conservative surgery, having been among the first to pioneer Corneal Cross-linking (CXL) – a technique he introduced in Italy in 2005 – and having conceived himself a microsurgical technique to avoid corneal transplantation, Mini Asymmetric Radial Keratotomy (MARK), in 1993.
Dr. Abbondanza is also one of the most experienced refractive surgeons, having introduced, among other things, PRK and Excimer Laser in Italy in 1989 and Phakic Intraocular Lens (PIoL) implantation in 2000, as well as being a prominent cataract surgeon.
He has also been treating glaucoma, retinal diseases and strabismus for the past 30 years. He is often interviewed by national/international media and has published over 20 clinical studies.
Dr. Abbondanza is married since 1984 and is father of two.
.

From 1984 to 1990 he works in the ophthalmic department at San Filippo Neri Hospital in Rome as an assistant MD.
He develops his interest in refractive surgery from the beginning and spends his time in the most advanced and renown international centres.

In 1988 he qualifies to perform “Epikeratoprosthesis” surgery for keratoconus, myopia, high levels of hyperopia and aphachy using a technique developed by Dr. Kauffman, director of the Ophthalmic Center at Louisiana University (USA). 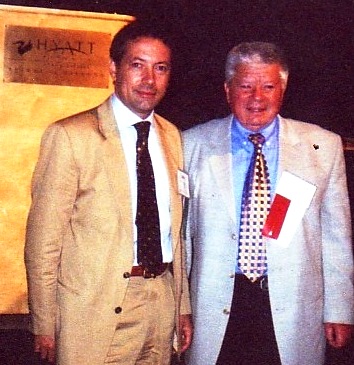 Dr. Marco Abbondanza and Prof. Fyodorov in the U.S.

In 1988, following studies at the Institute of Microsurgery of the Eye in Moscow (USSR), together with Prof. Fyodorov, he specializes in the following:
-Radial Keratotomy for myopia and myotic astigmatism
-Radial Keratocoagulation for hyperopia and hyperopic astigmatism.

Dr. Abbondanza is one of very few western doctors having these specializations, granted him by the Health Ministry of the Union of the Socialist Soviet Republic (USSR).

During his studies in Moscow, Dr. Abbondanza has been trained by Prof. Dr. Fyodorov, internationally regarded as “the Father of Eye Microsurgery”.

In 1989 he specializes in General Pathology at the  Sapienza University of Rome.

Since 1988
- studies new methods of correctional surgery in keratoconus , whereas to avoid corneal transplant or put off this surgery as long as possible in more advanced cases.
- takes part in numerous international and national conventions as speaker, author and co-author, relating his innovative theories which have since been used by many colleagues around the world.
- performs the first surgery for hyperopia in Europe introducing Radial Keratocoagulation in the Continent

From 1984 to 1996, together with a team of Italian physicians, he studies and develops a new surgical technique capable of correcting visual impairments caused by keratoconus and halting the evolution of this pathology.

From 1987 to 1996 nearly 500 eyes suffering stages I, II and III of keratoconus have undergone surgery using this method. Among these, only about 10 will need keratoplastic surgery. Those that had corneal transplant belonged to the III stage.
Later, the “ARK” technique, Asymmetric Radial Keratotomy, was only used for eyes suffering I and II stages of keratoconus.

Since 1987 he performs Radial Keratotomy (RK) incisional surgery, a safe technique to correct light and medium levels of myopia.

Following many years of discussion on the effectiveness of this technique in times of laser surgery, his belief is confirmed by the influential opinion of Dr. Lindstom and Dr. George Waring III, who see Radial Keratotomy as a safe, deft and efficient technique.

In 1989, he introduces in Italy PRK and the Excimer Laser to correct high levels of myopia and myopic astigmatism, together with a team of colleagues.

In 1992 he takes part in planning the 1st theoretical and practical Worldwide Course for Laser and Excimeri users held in Rome.

In 1993, he develops a new surgical technique, the Mini Asymmetric Radial Keratotomy, Mini ARK, capable of halting the evolution of stage I and II of keratoconus, even when dealing with emmetropic and hyperopic eyes. In the same year, he develops a new surgical instrument in order to perform Mini Asymmetric Radial Keratotomy interventions, known as a ‘double concentric corneal marker‘.

Since 1994, many Italian and international colleagues have been using this technique with excellent results both on the side of the surgeons and the patients. Today Mini Asymmetric Radial Keratotomy is a well-known technique and its validity is popularized by a number of centers in different countries (Italy, France, Germany, USA, Australia, New Zealand, Japan, India, United Arab Emirates, Qatar, South Africa, Hungary, China).

Since 1995 he uses Mini Asymmetric Radial Keratotomy on post-penetrating keratoplastic eyes (corneal transplant) which were affected by high levels of post-operative astigmatism.

Today, his constant use of incisional techniques has made him one of the few and most reliable incisional surgeons in eye surgery, where manual skills and an ability to produce an operative program are essential in producing a positive outcome.

In 1998 he takes part as speaker at the I.S.R.S. convention in New Orleans where he outlines new guidelines in the use of Mini ARK.

In the same year, at the annual A.P.I.M.O. convention (Italian Professional Medical Association of Ophthalmologists), Mini ARK is recognized as a valid method of treatment in the early stages of keratoconus.

In 2000 he operates in the application of prosthesis for pressure control in glaucoma and is one of the firsts to implant phakic intraocular lenses for elevated levels of myopia and hyperopia with iridal fixation.

In 2003 he qualifies to perform implantation of pseudo-accomodative intra ocular lens for the joint correction of both presbyopia and cataract.

In 2005 he is the first to introduce in Italy Corneal Cross-linking (CXL), a parasurgical technique with the aim of strengthening the cornea in patients with keratoconus in initial and moderate stage. Dr. Abbondanza has been one of the very first surgeons to use Corneal Cross-linking outside Germany and obtained official certifications were the technique was conceived, in Dresda, Germany, and in Zurich, Switzerland.

In the same year, he modifies and enhances the “Mini ARK” technique, which is now known as MARK, and is the first to combine it with Corneal Cross-linking.

In 2006 he qualifies to perform insertion of ARTIFLEX soft and flexible lenses, for the correction of sever myopia and hyperopia, which cannot be corrected with excimer laser.

In 2007 he develops a novel technique, Peripheral Corneal Cross-linking (P-CXL), aimed at treating stage-III and stage-IV keratoconus with ultra-thin corneas. The results have been published by a number of scientific papers.

In 2016 a new clinical study by Dr. Abbondanza and his team is published, which showed that Dr. Abbondanza’s MARK + CXL combined protocol, knows as the “Rome Protocol”, produces an average reduction in corneal curvature of 3,7D and a significant decrease of corneal aberrations, along with the halting of the disease itself.

Since 2016 he is in the scientific board of 360 Gradi in Oftalmologia News, a scientific magazine specialising in ophthalmology. 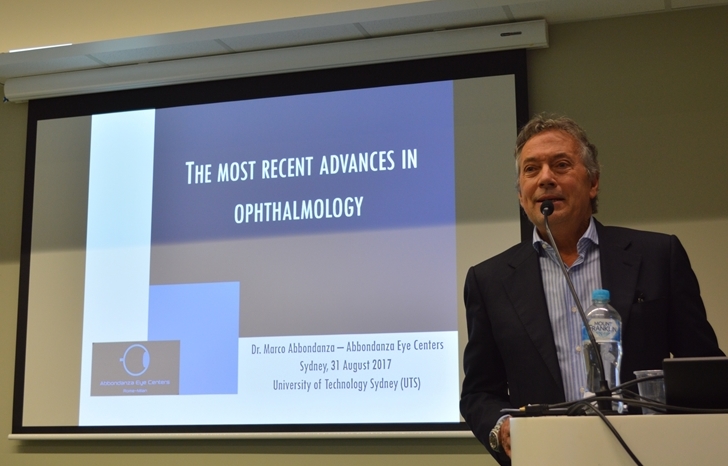 Dr. Abbondanza and his conference in Australia

In 2017 he is invited to present his own conference at the University of Technology Sydney (UTS), which was attended by ophthalmic surgeons, academics, orthoptists, statisticians and journalists.

In 2017 he receives a certificate of merit from the Dante Alighieri Society Sydney, for his support to the society’s scientific activities.

Since 2017 he is cooperating with the University of Sydney (USyd) – Save Sight Registries, SSR – with the aim of improving international research on keratoconus. Dr. Abbondanza is the 1st in Italy to establish such a research agreement.

In 2018 he is named one of the most prominent figures born in Naples, with a chapter on him published in a book written by historian Giovanni Liccardo.

All these years of research and development of new surgical techniques, made Dr. Marco Abbondanza one of the leading experts on keratoconus and keratoconus conservative surgery, as well as a prominent expert of the anterior chamber of the eye (eyesight defects, cataract, corneal pathologies).

Dr. Abbondanza is frequently consulted by international patients as well as fellow doctors and surgeons from different countries.

Dr. Abbondanza is listed in “Who is Who in Italy” and in “Who is Who in the World” and has been interviewed by the most infuential TV shows, magazines and scientific journals in his position of leading MD, ophthalmologist and eye microsurgeon.

In this section we show Dr. Abbondanza’s scientific studies, published by major international journals and cited as a reference, for other scientific studies, by a number of ophthalmologists and other MDs from around the world. Select a publication to read it.

• Surgical Correction of an Inverse Astigmatic Keratotomy following Penetrating Keratoplasty in a Patient with Keratoconus, International Journal of Keratoconus and Ectatic Corneal Diseases, vol. 4, no. 3, 107-109. 2015

• Mini Asymmetric Radial Keratotomy and Corneal Cross-linking for the Treatment of a Bilateral Stage IV Keratoconus in a 14-year-old Child, Medical Archives, vol. 71, no. 1, 69-71. 2017

• Peripheral Corneal Cross-linking (P-CXL) as a treatment for an ultrathin cornea with stage IV keratoconus: a new technique, Italian Review of Ophthalmology, vol. 3, no. 2, 97-103. 2017

• Long-term results of Mini Asymmetric Radial Keratotomy for the Treatment of Keratoconus, International Journal of Keratoconus  and Ectatic Corneal Diseases, vol. 7, no 2, 105-109- 2018

• Long-term Results of Mini Asymmetric Radial Keratotomy and Corneal Cross-linking for the Treatment of Keratoconus, Korean Journal of Ophthalmology, vol. 33, no. 2, pp. 189-195. 2019