Radial Keratotomy (RK) is a surgical procedure to correct mild to moderate myopia.

During World War II, Dr. Sato, a Japanese physician, invented Radial Keratotomy as a way of correcting myopia. But the methodology was not fully developed since the necessary technology in those days was incomplete. In 1972, Professor Fyodorov developed a modern and simple operating program for other surgeons to reproduce. Hundreds of thousands of people all over the world have since undergone operations using that technique.

Radial Keratotomy has an extremely high margin of safety and is worthy of comparison to more recent techniques. A great number of patients worldwide have been treated effectively and safely. The technique appeared destined to be surmounted by the arrival of Excimer Laser technology, but, as years pass by, it continues to be a safe procedure in order to correct post-PRK and post-LASIK minor problems. 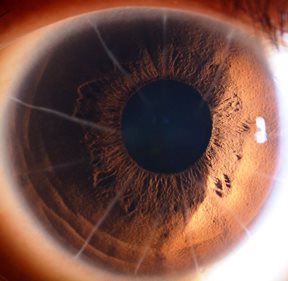 The main problem with Radial Keratotomy is that the surgeon must have considerable experience with the technique. Radial Keratotomy can be used to correct myopia that is in the range of -1 to -5 diopters. Dr. George Waring III, one of the first American refractive surgeons, considers Radial Keratotomy to be a modern, efficient and safe technique in the treatment of low degrees of myopia.

Dr. Abbondanza is a prominent cataract and refractive surgeon and has a long experience with Radial Keratotomy, a technique he has been using it since 1987. He specialized in this technique with Professor Fyodorov himself in his institute in Moscow. Dr. Abbondanza has also been one of the first surgeons to use the Excimer Laser and PRK (1989), Phakic Intraocular Lens implantation (2000), Corneal Collagen Cross-linking (2005) and is the inventor of the Mini Asymmetric Radial Keratotomy technique (1993).