LASER FOR MYOPIA, ASTIGMATISM AND HYPEROPIA: THE EXCIMER LASER 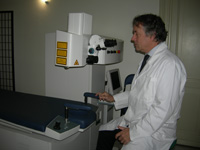 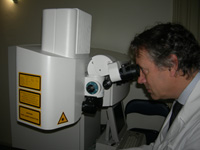 When treatment is performed for myopia the laser is applied on the central area of the cornea flattening the shape of the cornea.

On the contrary, when treatment is performed for hyperopia the laser remodels the cornea in the middle periphery of the cornea that tends to make the shape of the cornea steeper. Furthermore, the excimer laser can be used on the corneal surface as in PRK or in the thickness of the cornea as in LASIK.

Other laser techniques such as LASEK, i-LASIK and Epi-LASIK have intermediate characteristics between LASIK and PRK.

The aim of refractive surgery is that of focusing light rays precisely on the retinal surface without the need of artificial aids such as eyeglasses or contact lens.

In the case of myopia, since the light rays passing through the natural lens of the cornea become excessively convergent they cannot focus on the retina, treatment will consist in the reduction of the power of the cornea that will reduce the convergence of light rays and result in precise focus of images.

The cornea, as a lens, has a certain power expressed in diopters and refractive surgery aims to modify this lens in order to adapt it perfectly to the individual eye and to eliminate the visual defect.

The excimer laser produces a high energy laser beam in the UV spectrum. The laser energy can vaporize the molecules of the cornea with extreme precision. The high precision of the excimer laser provides the possibility to program the removal of extremely precise quantities of corneal tissue (in the order of microns) with specific ablation patterns from the corneal surface allowing a remodeling of the of the cornea. In the case of myopia , the treatment will be performed in the central part of the cornea, flattening the cornea and consequently reducing it’s power.

If the original visual defect is hyperopia, the laser treatment will be performed principally in the mid periphery of the anterior corneal surface, remodeling the cornea to increase it’s curvature.

PRK or Photo Refractive Keratectomy or corneal superficial photo-ablation can precisely treat conditions such as myopia, astigmatism, and hyperopia.

There are three main advantages associated with PRK treatment:

“What happens when I decide to undergo an operation with PRK?”
(Excimer laser treatment of the corneal surface)

The patient lies under a microscope while an anesthetic and antibiotic eyedrops are applied. After about 10-30 seconds when the anesthetic has acted, the superficial corneal layer on the surface (epithelium) is removed and the patient is told to stare at a blinking red light positioned above his eyes. The laser treatment is applied and will last up to 90 seconds.

After treatment, eye drops and a protective contact lens are applied, the contact lens will have to stay in place for a few days and the patient can go home immediately following the treatment.
The patient may experience sensitivity to light and may feel some pain in the following days, but the contact lens and the analgesic medication will help the patient lead an almost normal life in the postoperative period. The visual performance will be good, approximately 80-90% within 1 week and in a few weeks visual performance will be maximal. PRK is the most used laser technique to correct eyesight defects worldwide.

Lasik or Excimer laser Assisted Kerato-mileusis treatment can be adopted instead of surface treatment when the level of myopia is not very high.

The operation is divided into two parts:

1) An eye drop anesthethic is applied to the eye after which an instrument called microkeratome is used to make a superficial flap of the cornea. The flap, an extremely thin layer of the cornea, is mobilized and lifted leaving the underlying part of the cornea uncovered.

Laser treatment is applied on the uncovered cornea as in PRK, then the flap is replaced on the underlying cornea.

The creation of a flap during LASIK reduces the thickness of the cornea in the area to be treated with the excimer laser and therefore LASIK treatment should be considered for treatments of smaller degree than those treated using PRK.

Advantages of LASIK
An eye-drop anesthetic is used for this non-painful treatment, and the patient feels no pain in the postoperative period except for a slight foreign object sensation and slight ocular irritation.

The visual improvement is immediately noted by the patient, although total visual recovery usually requires one week.
The advantages of LASIK consist in less patient discomfort and slightly faster recovery. LASIK is widely performed worldwide to correct myopia, astigmatism and hyperopia.